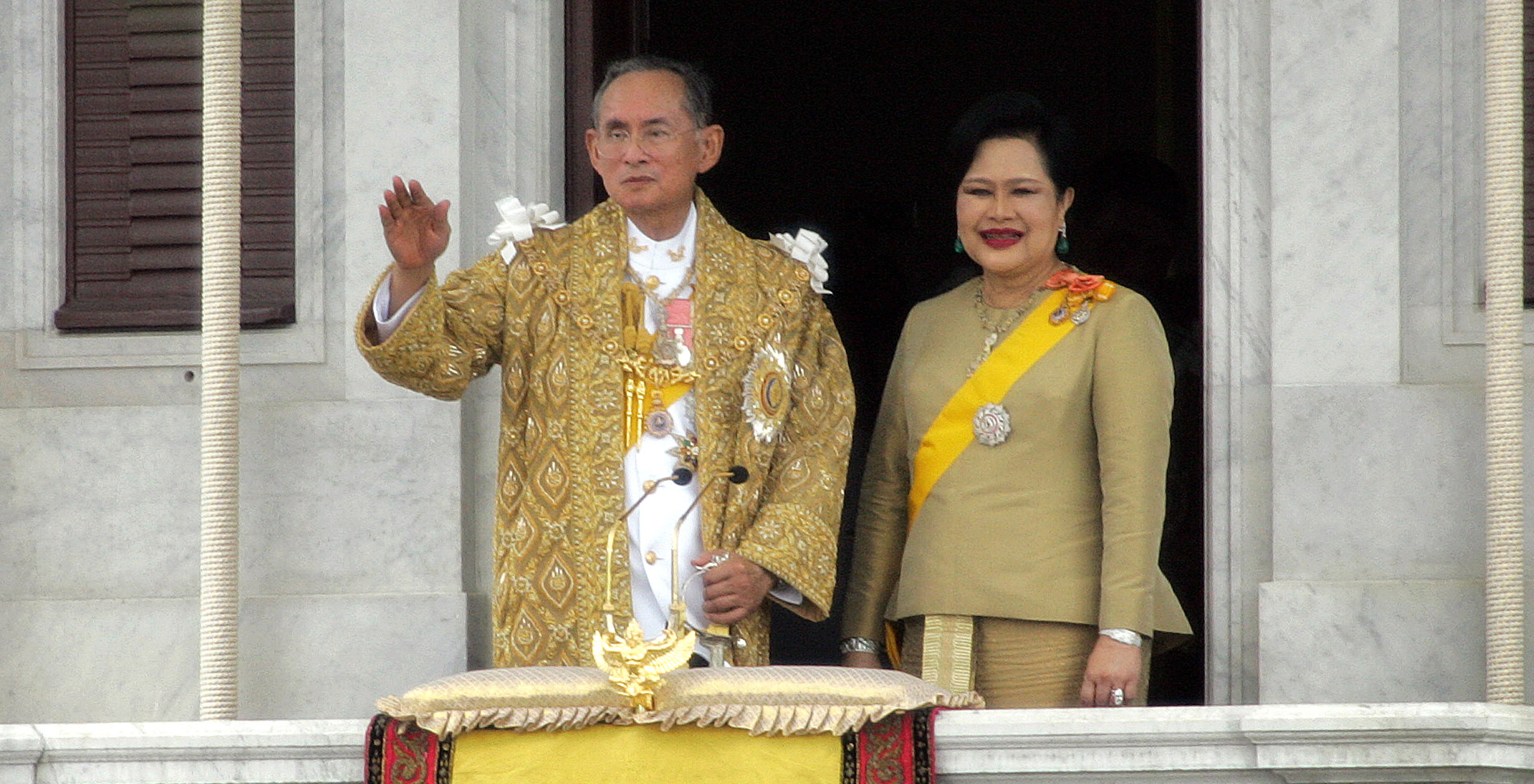 How can we love someone we had never met personally?

How can we… even revere him?

We were brainwashed, someone said.

Thailand is not a democratic country so we never knew otherwise, others commented.

Some, seeing us cry, even compared us to North Korea.

The strict Lese Majeste law, or as Thais know it as Law 112, forbids us from criticizing the royal family; Therefore, as many explained, we never really knew the truth or questioned our respect for the family.

Let me ask you some very simple questions.

Have you heard about Abraham Lincoln and his legacy? Do you respect him?

What about Nelson Mandela or Mahatma Gandhi?

Did you understand when the people wept for their deaths?

No, our King did not have to fight to free his race to have the same right as others in the society. But yes, he did fight, very hard, to free his people from starvation and poverty.

Though in different contexts, it is the same concept.

My name is Kalyakorn. I’m 33 years old, born and raised in Thailand. I consider myself a bilingual, spending my elementary years in a regular Thai school, then entered an international school for middle and high school diplomas. As a bilingual, who has deep interest in history, it’s fortunate that I’m able to access information and historical records in both Thai and English. In fact, my passion lead me to study the history of other civilisations, empires, and kingdoms even before I developed an interest in Thai history.

The four years in a Thai university made me realize how little I knew of my own country. Traveling to different places, mostly to rural areas, riding buses, sleeping in temples, eating non-luxurious meals, such as crispy cow skin with sticky rice, allowed me to see this country in a different light.

So, I started to look deeper into my home country. It was around the same time that I started to travel to our neighbouring countries. This made me realize that although we share very similar cultures and went through many similar events throughout the history, seeing the different outcomes of those challenging times between Thailand and other countries, I felt deep appreciation for whom had built this country to where it is now.

Yet, I learned that our past is not as glorious as some tried to paint it to be. I learned that through difficult conditions and under threats, the country was rushed into great reformation, under King Chulalongkorn’s lead, to try to survive during the time Western countries were hunting for new colonies in Asia.

Studying from both English and Thai references, I saw there were a lot more dimensions to the stories I’d heard since I was a child.

I learned that democracy was such a sweet and trendy ideology, but was forced upon Thais, through a coup, when its people were not ready as they were never educated to understand what democracy really meant.

I learned that many royal family members had to flee the country or they would risk being put in jail.

I learned, from comparing the history of my country to that of other countries, that how King Ananda, and his brother, King Bhumibol, came to the throne may be unconventional.

Prince Ananda was a young boy with royal blood, living in Switzerland with his small family. His mother was a commoner and his father, who was a prince, had passed away. But as a grandson of King Chulalongkorn, he was pushed by the then government to rule Siam, now known as Thailand, believing he would be easily controlled as a young king. When he grew up, he started to realize that there was more to his job than being a puppet. So, he started to really work as a king even during a short visit to his country.

Able to solve long existed conflict between Thais and Thai-Chinese community, King Ananda started to win people’s heart. Then, he was assassinated, a few days before he would return to his study.

After his death, the throne was then succeeded by his brother, King Bhumibol.

It was not an easy job.

It was probably the job King Bhumibol had never asked for.

This was the job that was forced upon him, at a very dangerous time.

But he accepted it.

It’s the truth every Thai knows. Although we don’t really want to talk about it, we know. I find it odd, though, that foreign press who love to glorify King Bhumibol’s reign, had never mentioned this.

So, I learned that through those difficult circumstances, where the monarchy was at its weakest, emerged a king who worked very hard, won over the hearts of his people, and eventually strengthened the monarchy.

Amid unstable political conflicts, he was the only figure that showed, through his actions, his genuine care for this country.

I once heard, „A king is not a real king without support from the people.“

King Bhumibol gained righteous power through the love of his people.
We trusted him and so we listened to him.

This has nothing to do with Lese Majeste, though many like to fancy the idea of the authority power pressing down people with laws that suppress human rights, just because it fits the stereotype of how a third-world country is supposed to be.

If I tell you that royal families have no real power in legalizing any laws….

If I tell you that the King’s power was suppressed under a constitution since the coup that forced democracy to this country….

If I tell you that we have a legitimate system to draft a law, which would then be proposed to senators, and so on and so forth, which usually takes months or even years….

If I tell you that most Lese Mejeste trials were played as a part of political games, many to create social tension for different purposes at different times for the benefits of some groups….

Would you believe me?

And that’s ok. I understand if you don’t understand.

But how can you respect Lincoln, be inspired by Mandela, or be saddened when Gandhi passed away? How could you side with Aung San Suu Kyi or choose to believe Dalai Lama’s words?

Most of you have never met any of them personally; Yet you believe when people loved them and respected them. Because you saw what they did, through pictures and videos and interviews and stories others told you.

So why is it hard to believe that our love for him derived from his goodness?

Just because he’s a king? In a country with Lese Majeste law?

The traces of King Bhumibol’s hard work are still very apparent before our eyes.

You can look up the evidences from various sources and from different sides of the time communism spread to this region and threatened to infiltrate Thailand, how we survived as the only democratic country, though with a king as the head of the state.

You can go up to the mountains and ask tribal villagers, whom neglected by Thai government, why they hang the king’s images in every house. Or you can go to the rural areas around the country, where water were once inaccessible by the locals, and ask them how the irrigation system was brought to them or how the artificial rain project had helped them.

For me personally, I had witnessed live on TV once when I was very young, on the day everybody was offering their wishes to the King to celebrate his birthday. Instead of enjoying the delight of being loved and given good wills by his people, he used that opportunity to ask the government officers of the water situation and explain the ‚monkey-cheek‚ theory, a plan he developed to help save water and prevent flood, while illustrating on the map he had prepared. That was the day I got to see my king working right before my eyes.

The assumption that the love we have for our king is purely because we are under-educated and the failure to recognize his accomplishments, because you’re stuck with his title, is superficial and pure ignorance in truths and dimensions of people and society of other cultures.

I’m not writing all this to beg you to love whom we love or even to respect him.

What I’m asking for is very simple: let us grieve.

You would see us cry. You would see us try to do things we believe are ways to repay his love and his hard work for us. You may not understand any of this and that’s ok. But, please, let us grieve. Be respectful to our loss.

If you don’t understand the concept of how losing our beloved King could be so painful, at least, I believe, you would be able to understand the pain of losing someone you genuinely love and respect; Can you?

It’s not too difficult, is it?

Your life will carry on as usual, even when you don’t talk about us. But our lives… our lives have changed and our hearts brokened.

Let us grieve, let us mourn, and let us do what we want to do. Stop attacking us, at least not at this time of mourning. Be respectful to this great loss.